The Truth About Combination Waves

For those new to Casio CZs, the oscillator has the ability to alternate between two different waves. For example, it can send out one cycle of a SAW wave, then one cycle of a SQUARE wave, then another cycle of the SAW and so on. All you have to do is specify the first and second wave to be used.

According to Casio, there are 33 possible combinations of waves. That's not nearly the whole truth of the ability of the CZ-1; when I count them I can find 216 possible combinations. The main reason why Casio's count of waves is so limited is that they don't admit to the existence of the window function. I have created a table (below) to explain where Casio's number 33 comes from.

The white squares (25) plus the pink squares (8) adds up to Casio's "33". This is their official tally of how many waveforms there are. This is also the number of waveforms that are available by programming the CZ-1 from the front panel.

1-2
White squares indicate unique and valid combinations of waves.
1-1
Pink squares are valid, but are equivalent to just using a single wave. For example, using wave 3 + 3 is the same as just using 3 by itself.
2-1
Blue squares are valid but not unique. That's because 2-1 is the same as 1-2, and 3-4 is the same as 4-3.
6-7
Green squares are not valid. It is not possible to combine the resonant waves because they are not just waves. They are a certain wave passing through a certain window function, and there can be only one window function per wave combination.

As has been previously stated, Casio's documentation does not tell the whole truth. They simplified the explanation of the waves, to keep people like you and me from getting confused. However, the truth is not actually that difficult to understand.

The second important thing to remember is that the waves available to be combined are NOT the same eight waves that are screenprinted on the front panel. The eight basic waves in the table below are the ACTUAL basic waves, which I described on a previous page.

The numbers in the table below correspond with how I have been differentiating the actual waveforms available through sysex.

The table below is the same as the logical table above, but now it shows the actual waves produced by the combinations. In essence, this table demonstrates that its possible to combine each of the 8 waves with each of the other 8 waves. The combination waves are shown without any window function affecting them. 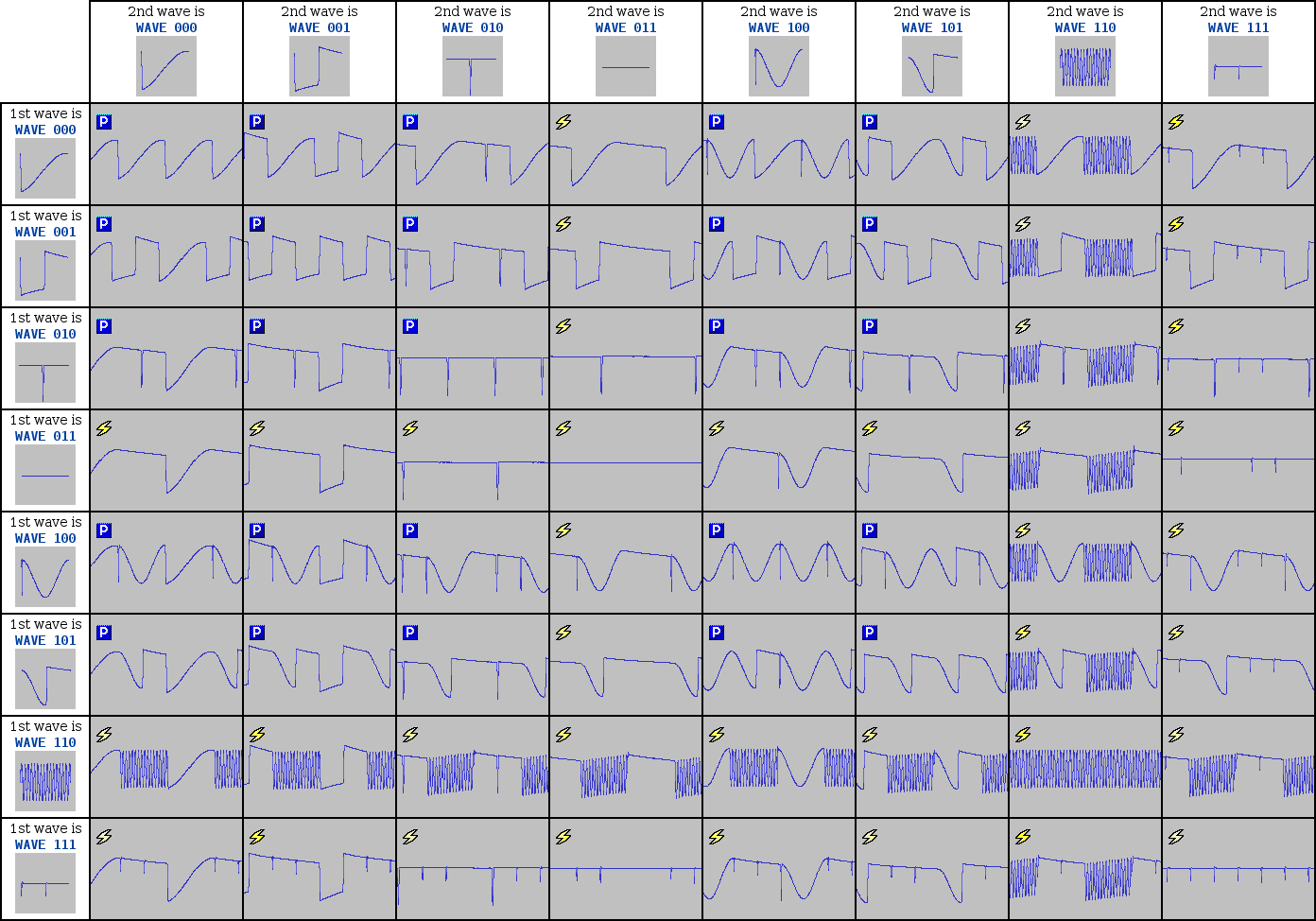 Key for this table

It is possible to combine any basic waveform with any other basic waveform. The result is exactly like the two waves have just been glued together. It is important to remember that these are not the same waves printed on the front of the CZ-1; these are the actual basic waveforms.