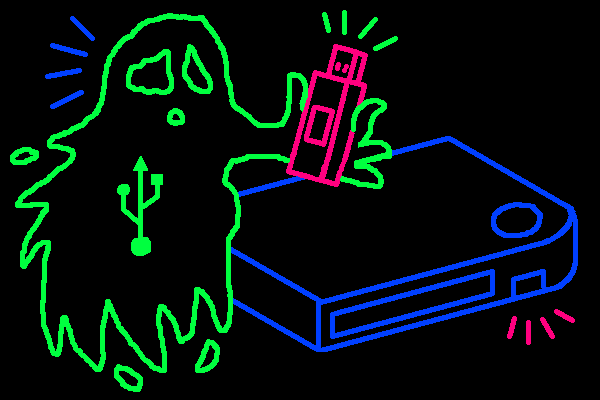 I’m sensing you need to update the software

We rent movies from our local video store. You should too!

On one recent trip, we got a DVD that was made within the past year. The movie was Ouija: Origin of Evil.

We usually do not have a problem, just drop the disc in the Blu-ray player and start watching. But this time the spirit world had found a channel into our living room via the Blu-ray player. The disc would not play.

The symptoms were: the Blu-Ray player would say “disc not found”, or it would spin for a long time trying to find the content, and would never play.

We thought it must be a bad disc, perhaps a severe scratch in some table of contents area or something. We took the DVD back to the store, and the staff there could play the DVD fine.

We brought back a different disc, and the same thing happened. Some evil spirit reached in through the Blu-ray player and caused the disc to not work. It was the same symptoms as before.

(Meanwhile, we did some obvious other testing. Be played a known good DVD to make sure the Blu-ray player was not completely broken. We tried playing the problem disc in some other players, where it also didn't work.)

Now was this paranormal activity, or was there something more mundane happening? Let’s look at the evidence. Two different discs, of the same title, did not play here. But at least one of these worked at the store.

Maybe this newer disc contained some kind of feature that just was not yet supported by the Blu-ray player?

Our Blu-ray player is a BD-H5100 by Samsung. I went online to see if there were any software updates available.

I followed the steps in the guide, and updated the software in the Blu-Ray player. It worked! The disc started playing as well as it ever did before.

The conduit was broken and the spirits were now safely trapped in the spirit realm.

I don’t have my Blu-ray player connected to the internet. It could be that network-connected Blu-ray players get automatic updates, whereas I have to manually apply updates.

If that’s the case, then I hope this write-up helps my fellow people who don’t let random appliances go on their network.